Today I want to tell you a story about one of the most bloody inspiring people I know, my friend Jen Wynne.

Jen had a successful career as an operations manager for a men's fashion company, a business that she helped build from nothing. In her mid-30s, she and her partner sold that business, and Jen found herself feeling adrift. She realised that she hadn't actually liked her job very much, and hadn't really chosen a career so much as fallen into one. She'd realised she was in her 30s but still had no idea what she wanted to do when she grew up.

Jen had a choice: she could try to find another job doing what she'd been doing using all the skills she already had, or she could take some time off and think deeply about what she really wanted the rest of her life to look like. Why I find Jen inspiring is that she chose the scarier option. What a warrior, right?

Like a proper dork I started with spider diagrams, pros and cons lists and reading up on how others made this decision. I came out the other side with a few key requirements and three ideas of things I might want to do. My three options were quite different from each other. I really wasn't sure which to go for, so I tried all three. I also knew that I had a limited amount of time because I had given myself from August to December to make a real choice. I needed to fail fast if I was going to fail at one or all three. Although I had some money saved, I was on a tight budget, so I didn't want to spend large amounts on something that I wasn't sure about.

Her three options really were very different, both from each other and from the career she'd had before. One of them was coding, which Jen had literally never done before, but realised was a career that might be able to offer her the balance of creativity, freedom and challenge that she was looking for.

I love how purposeful Jen was about this whole process. I remember sitting with her at the Dog's Bollocks in Cape Town (sharing one of those burgers the size of your head) while she talked me through her plan: she was going to sign up for short courses in each of her three options to "test-drive" them.

This is what makes internet learning so amazing; for a small amount of cash you can dip your toe in and see if it sticks. I did this by going to codecademy - the first month is free and it's $20 per month after that. I started with Python, then went into data science, followed by Java. I really enjoyed each of them, so my choice was made!

Jen was super-disciplined about all this. She treated her online courses like a 9-5 job. After her three-month "information gathering" stage was over, she had a clear choice: she wanted to become a software developer. Rather than keep trying to learn on her own, she decided to find an apprenticeship to round out her skills and get herself into the job market.

I was told by many smart people that a lot of developers are self taught nowadays, but I also know my own confidence levels and knew that I needed to get some formal in-person training before I would have the guts to start looking for work. I found a company nearby that was offering just this, mid-Jan to mid-April. It cost a fair amount, but turned out to be just what I needed to add to my online learning. This was really just something that I needed, not everyone will require the in-person confidence.

After finishing her bootcamp, Jen found an internship at a startup, which turned into a job, and she's still there a year later. And she loves it.

Money is still tight, starting from the bottom again will do that, but I am still so glad that I made this move. Although starting something new in your mid-30's means that you are 15 years behind in that particular field, it also means that you can bring experience to your job that others don't yet have. Most importantly the next 30 years of work are something you can look forward to rather than dread. Now that I have made the move, all I can think is how grateful I am that I took the chance and made the most of it. It still seems surreal to enjoy my job the way I do.

Here's what I love about Jen's story:

I've spoken before about how I like to craft themes to guide every new season. This week, I'm taking some inspiration from Jen and ushering in The Spring of Apprenticeship.

Sometimes, when we’re terrified of embracing our true calling, we’ll pursue a shadow calling instead. That shadow career is a metaphor for our real career. Its shape is similar, its contours feel tantalizingly the same. But a shadow career entails no real risk. If we fail at a shadow career, the consequences are meaningless to us.

I have been exceptionally fortunate over the past few years of my life, growing a non-fiction writing career, building a tech business with my friends, making a living from talking to people about choices and money. It's been ridiculously fun and satisfying and no one person should ever be so lucky. So it also feels strange to confess that it's also felt like a shadow career that mimics the one I care about more: making up stories.

But towards the end of last year, I finally felt like I had both a healthy enough Freedom Fund and enough fiction writing credits under my belt to try to actually go pro. I stopped doing (almost) everything else, and have dedicated the past few months to trying to write fiction full-time. This is simultaneously:

The problem with actually taking a gamble on the thing you care about most in the world is that it feels like somebody tossing you a delicate glass orb with everything you've ever dreamed of inside, saying "just don't drop it!" Like, I am terrified that I'm going to mess one thing up and ruin my chances of happiness forever. I know, rationally, that this isn't true. No one project makes or breaks your career. But that's how it feels.

And here's a tough confession: I've been re-reading the draft of Magpies that Dale and I spent the past few months writing, and it's honestly not very good yet! That's pretty bruising to the ego, but I know that it's also extremely normal. Ira Glass has a wonderful quote about this:

Nobody tells this to people who are beginners, I wish someone told me. All of us who do creative work, we get into it because we have good taste. But there is this gap. For the first couple years you make stuff, it’s just not that good. It’s trying to be good, it has potential, but it’s not. But your taste, the thing that got you into the game, is still killer. And your taste is why your work disappoints you. A lot of people never get past this phase, they quit. Most people I know who do interesting, creative work went through years of this. We know our work doesn’t have this special thing that we want it to have. We all go through this. And if you are just starting out or you are still in this phase, you gotta know its normal and the most important thing you can do is do a lot of work. Put yourself on a deadline so that every week you will finish one story. It is only by going through a volume of work that you will close that gap, and your work will be as good as your ambitions. And I took longer to figure out how to do this than anyone I’ve ever met. It’s gonna take awhile. It’s normal to take awhile. You’ve just gotta fight your way through.

The problem with imposter syndrome is it's often self-fulfilling. You're afraid of being caught out as an imposter, so you don't ask questions, so you fail. And I really, really don't want to fail at this.

So, this spring's theme is my attempt to try throw a rope over my fear, harness it to a chariot and make it do something useful. Instead of letting myself feel like an imposter, I'm embracing this as a time of apprenticeship. Instead of just flopping around going "I'm not good enough arghghghghghgh" I'm trying to proactively make a plan to get better.

There aren't many apprenticeships for writers (there should be!) so I'm channeling my inner Jen and just making one up. I've put together an active learning plan for the next few months (yes yes, I'm trying to "type A" myself out of my problems again, I know shhhhh).

I've set myself a bunch of nerdy tasks like:

I've already read a lot of books about writing (here's a list of my faves) so I'm not assigning myself more reading. Apprenticeships are about practice, not theory.

The tasks aren't as important as the mindset. For the next few months, I'm giving myself permission to suck, as long as I'm learning.

This season is about trying to be more patient with myself. Giving myself the time to fight through the period of knowing I'm not doing good work, but doing the work anyway. Telling myself, no, you ridiculous sausage, you don't really know what you're doing, but you're doing your hecking best to learn, and that's okay.

In my money book, I talk about the importance of building up a Freedom Fund to enable your boldest dreams. I've been building up my Freedom Fund for years. But recently, I've realised that if you never use your savings to actually take those big risks, then it's not really a Freedom Fund at all. It's just a Money Fund. And money is worthless unless you turn it into stuff that matters to you.

It feels really strange to be tapping into my Freedom Fund. But yoh, sometimes you've just got to back yourself and trust that even if you're not great at something now, you could get better at it if you tried. So, hell. Here we go.

What about you? Are you setting yourself a new theme for spring/autumn? I'd love to hear about it, if you are!

Wishing you bravery, mentors, and a sharp axe,

A couple of lovely things recently:

February, month of despair,
with a skewered heart in the centre.
I think dire thoughts, and lust for French fries
with a splash of vinegar.
Cat, enough of your greedy whining
and your small pink bumhole.
Off my face! You’re the life principle,
more or less, so get going
on a little optimism around here.
Get rid of death. Celebrate increase. Make it be spring.

From "February" by Margaret Atwood. She's so right: voetsek, winter! Boris says I'm allowed to meet up with ONE FRIEND from next week if we're sitting outside so it had better get warm, PRONTO. 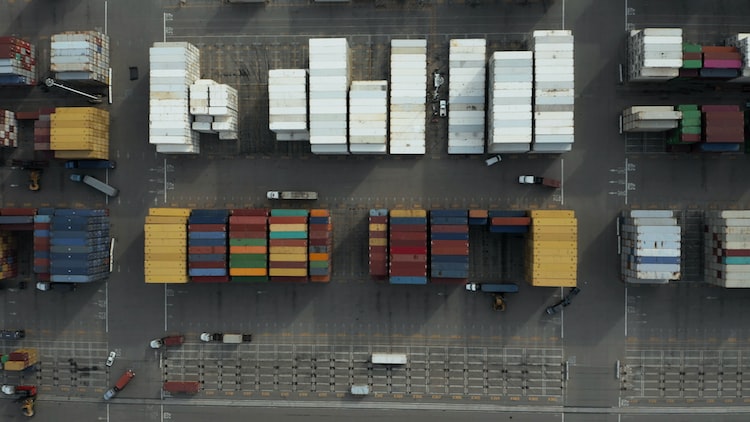 Is your job meaningful? And does it have to be? 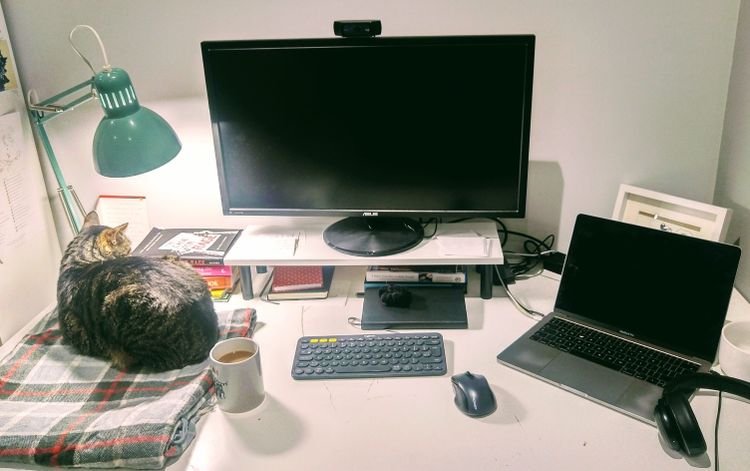 A peek at my work setup 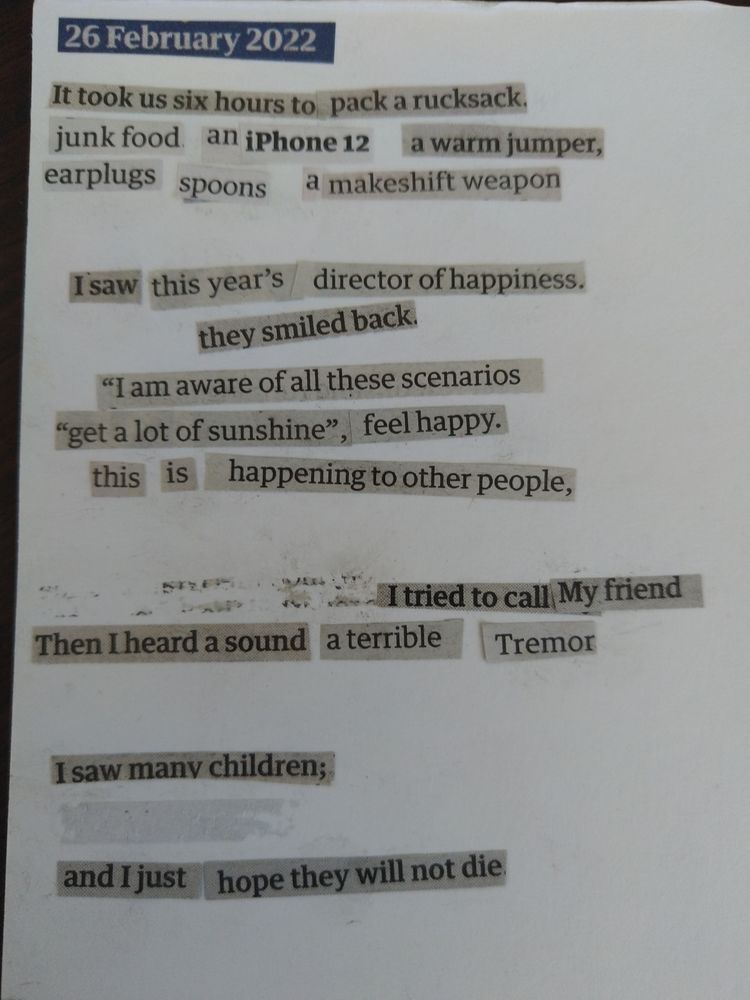 A cut-up poem for Ukraine

A small poem made from words cut out from the Saturday 26 February edition of the Guardian
Feb 28, 2022
1 min read
Apr
23 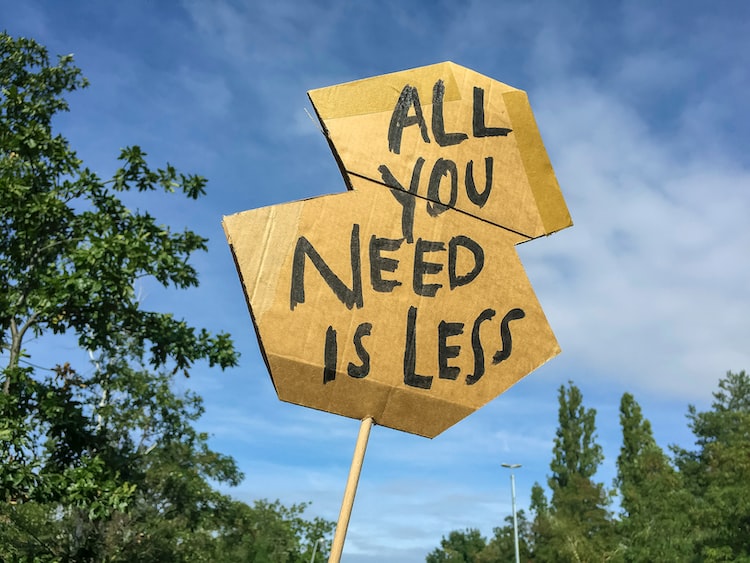 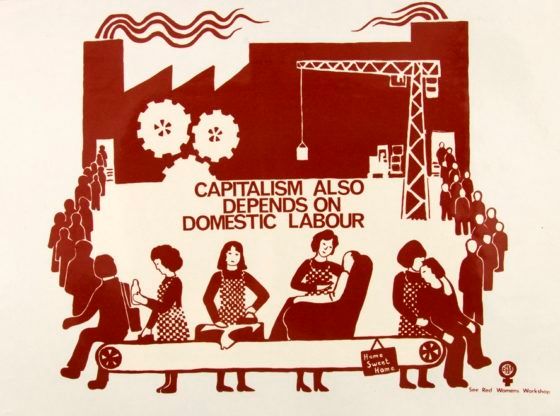 What work do we value?